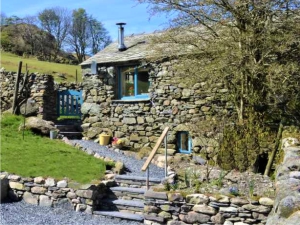 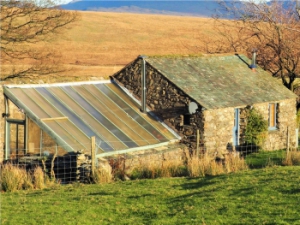 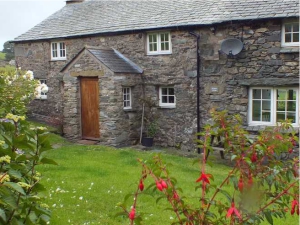 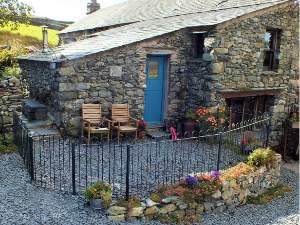 Described as “The Jewel in the Crown of the Lake District”, the tiny villages of Ulpha and Seathwaite are two focal points of the valley.
Here are some of the places worth a visit whilst meandering down the valley. There are plenty of places to stop and walk from and why not have a meal and a pint in the Newfield Inn - 9

Frith Hall is visible as a romantic ruin on the skyline as you drive up the valley. Four hundred years ago it was a hunting lodge overlooking the deer park of Ulpha. 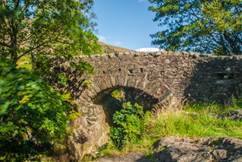 2 - Birks Bridge
The picturesque stone pack horse bridge spans a ravine and probably dates back to the 18th century. One interesting feature is a series of drain holes built into the bridge parapets.

3 - Forestry Walks
Just up from Birks Bridge is a Forestry Commission parking and picnic area. From there you gently rise as you walk up through the forest with views back towards Walna Scar. 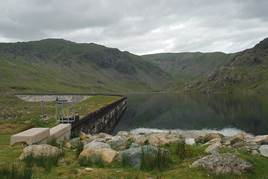 4 -Seathwaite Tarn
In 1904 the dam at Seathwaite Tarn was built to supply the expanding town of Barrow-in-Furness with water. The Newfield Inn will provide you with a fishing licence. 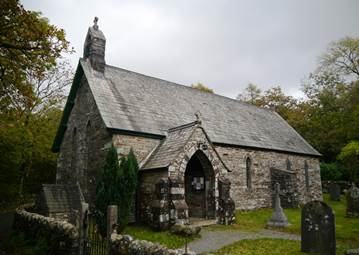 5 - Ulpha Church and 6 – Seathwaite Church
Ulpha church is a testament to the craftsmanship of one-time parishioners with the altar itself carved from a local cherry tree. There are still the remains of wall paintings high up on the inside of the church.

Industry
The fell side provided the Duddon with its greatest resource. Waterpower from the river was utilised by both the Bobbin Mill (on the road out of Ulpha just before you get to Ulpha bridge) and corn mill at Ulpha. Quarrying and the sale of slate, the only local building material, brought valuable income into a once self-sufficient community. The workings of the quarries are still visible on the hillside. 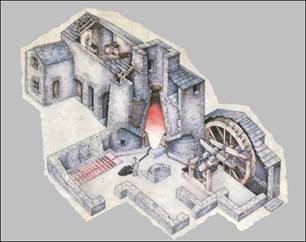 7 – Restored Remains of the Duddon Iron Furnace
Iron ore was mined in Furness and West Cumbria from the middle ages onwards and smelted in primative hearths or bloomeries. Established 1737, the Duddon Furnace was supplied with charcoal from the ancient coppiced woodland nearby. The restored remains are of one of the most impressive charcoal-fired blast furnaces in Britain. 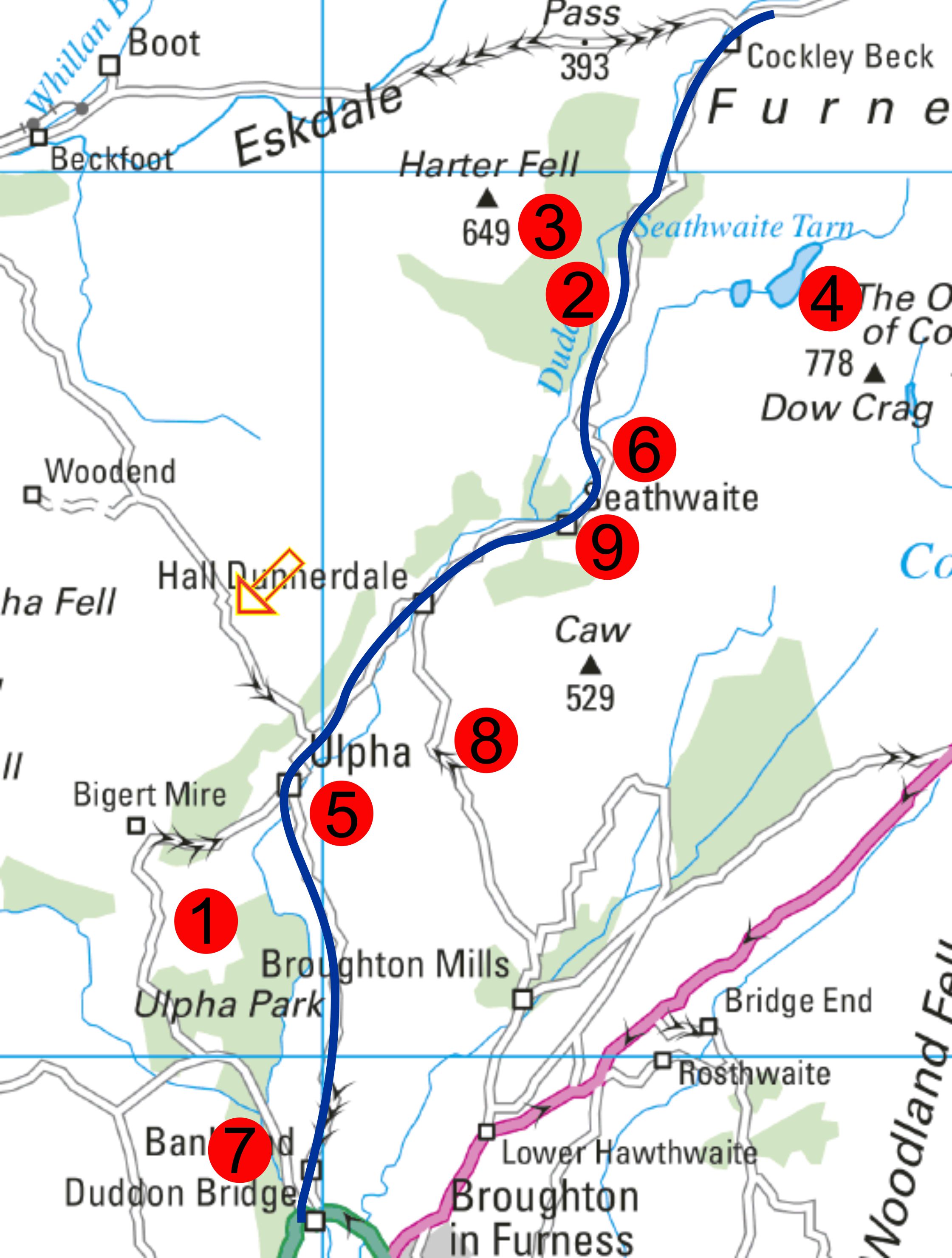 Also known as Dunnerdale, the more intimate and narrow valley of the River Duddon has no lake of its own and is enclosed at its head by the rugged high fells of Harter Fell, Ulpha Fell and Grey Friar, with two of England’s highest mountain passes meeting here at Cockley Beck.The valley then runs south-west to meet the wide estuary and the Irish Sea.

The Duddon landscape has changed little since the 18th century, when William Wordsworth wrote “Time, in most cases, and nature everywhere, have given a sanctity to the humble works of man, that are scattered over this peaceful retirement” (‘Notes to The River Duddon’, A Series of Sonnets’ 1820). Settlement here dates to at least the Neolithic period, with the remains of one of the most impressive of the Lake District’s many stone circles to be found at Swinside Farm. Traces of Bronze Age settlers are also visible on the fells above the valley.

Hardknott Roman fort sits high on the pass of the same name that winds its way westwards up from the head of the valley. There’s no obvious medieval settlement centre in the Duddon Valley, although nearby Furness Abbey was influential here, with Monk Foss Farm taking its name from the connection. The abbeys would also have helped develop and control the medieval iron industry.

Today, the valley is still thinly populated with two small hamlets at Seathwaite and Ulpha and the nearest larger village at Broughton-in-Furness, just to the east of the estuary. Its combination of geology, woodland and water resources made the Duddon Valley an important location for industry over several centuries. This included slate quarrying, copper mining, iron smelting, peat extraction and cloth manufacturing. Although now there is little in the way of industry here, there are still the remains of many charcoal burning ‘pitsteads’ on the western side of the valley. There are also the traces of carding mills where wool would have been prepared for spinning, and ‘retting’ ponds where hemp grown for rope would be soaked.

The valley was the subject of a series of sonnets published by Wordsworth in 1820. The Duddon Sonnets received more praise in his lifetime than any other of his works. When JMW Turner read these, it inspired him to visit and paint Duddon Sands. Coleridge also wrote of the valley in his 1802 ‘Notebook’, calling it “O lovely, lovely Vale!”.

Unlike other areas of the Lake District, there has been little to trouble conservationists in the Duddon Valley over the centuries. There were protests over the development of Seathwaite Tarn as a drinking water reservoir in the early 20th century and in recent years some steps have been taken to remove inappropriate infrastructure from the landscape. Friends of the Lake District helped reduce the impact of commercial forestry in the upper valley, making Black Hall Farm exempt from planting. The National Trust subsequently took possession of the farm.

The Duddon Valley may be a modest, less-frequented place but it is a rich, beautiful and inspiring landscape with a significant identity and history.